America Is Still Good, and The Cancel America Crowd Is Still Wrong

As we sort through the aftermath of this election, one thing is clear: the battle to preserve all that is good about America and to defeat the cancel America BLM Democrats hasn’t ended. No single election can be the end of that battle. We understand, as many of you...
Read More

I just found out my registration to vote here didnt go through. I am still registered to vote in Arizona so I just booked a flight and I head out in 2 hours. I will not be having a show tonight as getting out there to vote is way more important to me. Love you all!﻿

Bill spoke with Tom Klingenstein about his piece where he outlines the case for voting for President Trump. You can see the full piece here: https://www.youtube.com/watch?v=REJVCy2Z2I4

Tom Klingenstein is the chairman of the Board of Directors of the Claremont Institute.

Media bias alert: Imagine this was said by a transgendered black woman

….imagine if Tom – a white man – was a transgendered black woman. Imagine this transgendered black woman gave the intellectual foundation for a Biden endorsement, and that this speech was endorsed by MSNBC’s Chris Hayes and Rachel Maddow on its way to getting 1.6 million views. Imagine that the message was in Newsweek and Real Clear Politics, was endorsed by a leader of the Congressional Black Caucus, and was retweeted by the Biden campaign. And, finally, imagine if the press was kept well-informed of the growth of this movement from a single speech to a major national movement?

President Trump understands that teaching that America is systemically racist will only increase racism. Only American ideals and justice are the remedies to racism. The President deserves credit for standing up to those who teach Americans to disdain their country, and for standing for those who believe in the rule of law, equality of opportunity, and individual liberty.

The Cancel America movement and Black Lives Matter can’t afford to allow black voices to unravel the left’s narrative on race and show another way—a way that believes America is Good because of the opportunities for all to succeed no matter their race.

In AmericaIsGood.us founder Tom Klingenstein’s recent interview with Ed Morrissey, Klingenstein shed some light on Black Lives Matter, Cancel America, and their arguments’ inconsistencies and dangers. He started off the interview with a commentary on the radical 1619 Project, which claims that America was not founded on moral principles but on racism and slavery. Morrissey and Klingenstein agreed this can only result in remaking America, not improving it.

It’s not just Maine – America is not systemically racist

Republican Senator Susan Collins recently got in trouble with the Cancel America media for defending the people of Maine as not racist. “ I do not believe systemic racism is a problem in the state of Maine,” she said, adding that “we are very fortunate in the state of Maine because we have terrific members of law enforcement.”….
Klingenstein urges Americans to recognize the Cancel America movement for what it really is, praising such moves as Trump’s Executive Order against racist “white privilege” trainings. As he told PJ Media yesterday, “The President deserves credit for standing up against this deeply entrenched industry and for standing up for America’s systemically just traditions of race-blind equality of opportunity and individual liberty — that all Americans are equal under the law.”

Trump is the pro-religion candidate in 2020

The Trump administratin has defended religious liberty for the past four years, undoing the Johnson Amendment to allow pastors toe exercise their First Amendment rights and fighting to end Obamacare mandates that force businesses and religious institutions to violate the tenets of their faith. In contrast, a Biden Administration would force faith-based organizations like The Little Sisters of the Poor to provide abortion-inducing drugs and devices.

A Man vs. A Movement

I do not think the Republican leaders are framing the election properly.

Nor are they doing a good job describing what’s at stake in this election.

Praised and extolled by Rush Limbaugh

And then there was another piece from chairman of the board of directors of the Claremont Institute that came out in July by Thomas Klingenstein, and he has now a companion piece that was released this week. The piece in July — and I’m sure you’ll remember this. It was a piece in which he advanced the theme that what this election is about — and, in fact, the way to define the future of America going forward is that it is about — preserving the American way of life.

“Preserving the American Way of Life.”

So he’s expanded on that theme, and I want to share it, as I did back in July. I want to share with you some pull quotes, some experts from his piece that was published this week. He says, “Trump versus Biden…” What he’s done here is just try to reduce this to the simplest explanation of what’s at stake as he can in order to reach vast numbers of people. 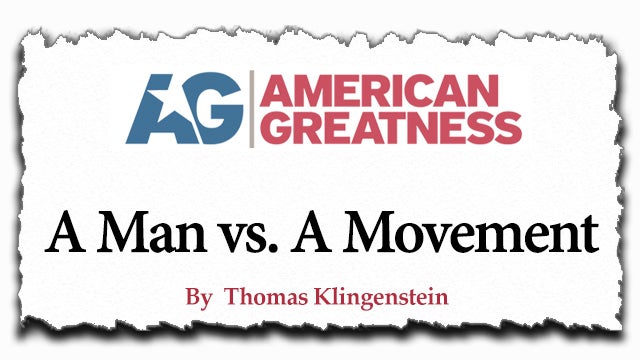 Well, his campaign “is controlled by people and a movement that believes America is bad.” Black Lives Matter, Antifa, Alexandria Ocasio-Cortez, Ilhan Omar. That whole cabal believe that America is deeply flawed, deeply imperfect and irredeemably unjust — and that’s a keyword: Irredeemably. America cannot be fixed, in their perverted view.

America is beyond all ho